Marital or spousal rape is non-consensual sex within marriage. Yes, rape can still happen even if you have a marital relationship with your partner. Everyone deserves protection against violence, and rape in marriage is considered spousal violence and abuse. Some may even file for divorce, while others hire a family lawyer in Singapore to settle the issue and avoid escalation.

Still, consent always matters, even if you have conjugal relations with your partner. Promoting a culture of consent today is an empowering idea to protect the vulnerable against such forms of violence. Everyone has the right to say “no” and “stop.” Thus, many people today recognise marital rape, domestic violence and sexual abuse. However, what does the law say about marital rape? Can you charge your husband or spouse with the crime of rape, and can you use it as a ground for divorce?

There are many factors that affect our view of marriage. It’s often interpreted from the traditional, personal and religious perspective. Unfortunately, many are still reluctant to criminalise marital rape. Many men were given immunity against their women crying out of rape. While there are Women’s Charter for advancing women’s rights, immunity against marital rape was a thing. But today, women are protected by the Penal Code under 375(4) under the circumstances:

Hiring and engaging with the best divorce lawyer in Singapore can grant you the right course of action should the offence have been taken into consideration under the circumstance. Engaging with a lawyer can be beneficial for encountering such cases and provide you with more ways to deal with the matter from a legal standpoint.

Here are the most common aggravating factors that the court will often consider and recognise:

Non-consensual sex in marriage, regardless of the circumstances (given in the Penal Code), is considered by the court rape.

Can You Use Marital Rape As ‘Unreasonable Behaviour’ For Divorce? 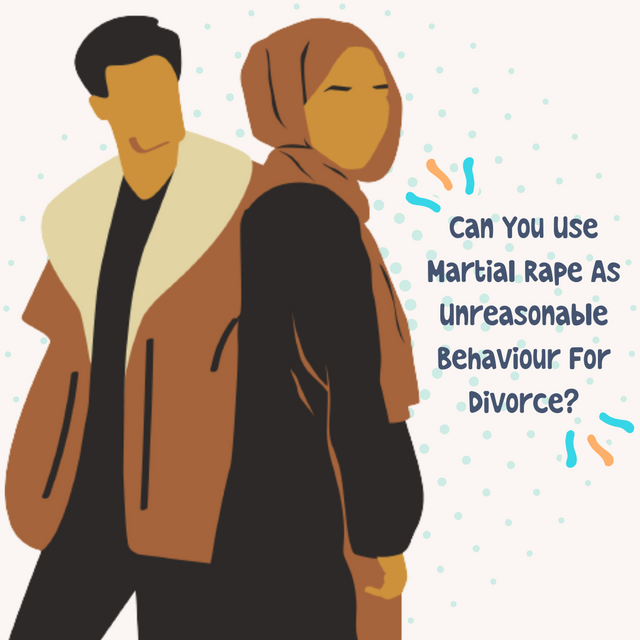 It is not often sufficient to say that both parties (the husband and wife) are no longer getting along to warrant the ground. The basis should demonstrate that the spouse or partner is engaging or behaving in a way that is beyond what one should expect with reason in a household or living with them for long. In some cases, many would hire the best divorce lawyer to pinpoint if a particular behaviour fits the criteria, which is advisable if you are in such a position.

It is within the context of the ground for divorce that if your spouse is engaging in a particular behaviour that convinces you to maintain the marriage with that person is no longer bearable. On the other hand, marital rape is often used as an offence of rape according to the existing laws. However, a spouse can be charged for ‘voluntarily causing hurt’ should the man forces his spouse/partner to have sexual intercourse. Consulting a divorce mediation firm is a must to determine the exact steps and decisions to take.

One can identify that suchbehaviour is ‘unreasonable’. Thus it makes it unbearable for a wife to live with her spouse/husband. It can be used as grounds to file for a divorce if proven true, and the court will recognise it as a clear breakdown of the marriage due to such action.

You can often opt for a divorce mediation firm or lawyer for consultation if you have a specific scenario and are wondering about the proper course of action or decision against your spouse.

Here are the common ways to test unreasonable behaviour via these three types of tests:

An objective test is used to determine whether the victim or aggrieved person can reasonably expect to continue living with their partner/spouse by an account of both their characters and personalities.

The subjective test determined if the distressed party can reasonably tolerate living with their partner/spouse disregarding the accused party’s behaviour and attitude.

A behavioural test is taken to ascertain and assess the behaviour of the accused party or perpetrator. It includes their acts by the aggrieved party and seeing if it has any significant effect on the marriage, including their relationship with other family members.

If you are looking for a divorce or probate lawyer in Singapore, visit Quahe Woo & Palmer for legal services and resources.